I just happened to think about this recently, probably because my experience was so long ago—as early as 1973, more recently in 1989. When I was at ORD the first time, I was assigned to the TRACON downstairs, one floor below ground level, at the base of the tower. However, I spent some time in the tower to familiarize myself with how they did things upstairs that affected us downstairs. At the time ORD was a newly split facility—tower controllers and radar controllers—so new, that when I got my bid acceptance notice in January, 1973, I called up there to ask if they were planning on me being a tower flower or cave dweller. The world of tower controllers is a completely different ball game compared to us dwellers of dark rooms. They assured me they had a seat waiting for me in the radar room. Anyway, now, the facilities aren't even in the same county.

Anyway, what I remembered was a device that was designed for something entirely different than ATC, I’m sure, and that I’ve never seen before or since. I cannot remember the name of it, nor how to describe it for a search string. It is almost quintessentially a product of the business environment of the 1960s, and likely has no equivalent today.

So what is this device of mystery? Well, in the tower cab, it was sort of like a thick tablet. There was a roll of paper in its base that fed through a guide, then over a platen, then out through another guide with a serrated edge, much like on a waxed paper container. Hovering over the exposed paper was a stylus supported by a wire or cable that stretched from side to side. There may have been a second cable attached and running at 90° to the first, although I can’t recall that detail now.

There was a similar device in another location (the Weather Bureau, located at MDW, some 13 miles away—and possibly a third down in the TRACON), all attached to the phone lines, I imagine. In any event, it would have been a totally dedicated, always off hook, connection, much like today’s DSL, although not broadbanded.

In operation, someone at any one of the devices could use a stylus to write notes or information such as current weather sequences, and through some magic electronics and servo motors (much like radio controlled airplanes and no doubt the same technology) the exact data would be printed out by the stylus-on-strings at the remote device(s). It was two way, so the receiving operator could pen a response if necessary or pen an inquiry as original work.

I’m certain about the Weather Bureau connection because it was from the data scribbled to us that controllers would update the ATIS message recording, supplementing the weather sequence on the freshly printed sheet with the runway configuration in use, the approaches to expect, etc., and the most recent code letter, which was aired continuously on one of the radio frequencies assigned to the facility.

I never used the stylus device thingy myself, except occasionally tearing off the message as it rolled out of the exit and passing it on to the tower sup. The one thing I really remember is seeing someone write a message on the pad and the last action was to use the stylus to move the paper forward (creating an original hard copy) which caused the receiving paper to eject, as well. Text messaging the old way!

If you had one of these in your facility and you remember the name of it, please contact me and let me know. I seem to recall some sort of 1950s business-like name ending in -Dyne, -Phone, or -Graph. 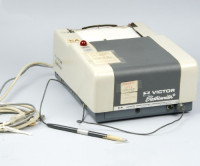 Update! When I got together with my old ORD buddy,SeaweedI asked him about it. He said he thought Electro-Writer or something like that. Well, upon returning home, I did some searching, and it was exactly like that. And, I found a picture!